As with most of the trips we make abroad, our morning started with a raging gale and snow. It was a crisp, clear Saturday morning, and the birds were playfully chirping from the newly flowered lilac bushes. Though the temps were holding in the mid-10C's, the snow was blinding. I hitched up the team of feline sled pullers and made for the kitchen. Unruly bunch they were today, but a quick snap of the whip and they sprang out of their melancholic tongue bathing rituals and heaved for the coffee pot. Several hours later, we reached the Fountain of Caffeine, long sought by ancient mariners and groggy early morning adventurers. Silly fools, Mr. Coffee is more than just a life giver, He is indeed the nourisher of the soul. My Sweetest and I settled in for a few hours of telly (Jack Hanna's Top Ten Adventures, Ocean Mysteries with Jeff Corwin, Born to Explore with Richard Wiese, and Sea Rescue with Sam Champion) before undertaking the laborious task of packing the ten metric tonne luggage. In no time, which in "packing ten metric tonnes of luggage" terms is about an hour, we loaded the Neon Avenger, AKA Beaner, and steered a course East, toward that Mecca of civilization, upstanding politics, and deep-dish pizza, Chicago.

Several weeks of hard driving later, navigating through thick jungles and wide rivers, we arrived in the Holy Land. Dammit, I knew we should have made a left at Albuquerque....

More weeks passed, and at last we arrived at the humble abode, the place we would call home for the next 70 and 3/4 hours, The Condo. We had done massive amounts of research to secure said abode, from consulting the Oracle of Google to utilizing the latest in high tech telephony. At last, we were here. An hour early no less. Now to simply wait for the owner to arrive and hand us the keys. The time passed slowly, but soon we were greeted with the huge smile and hilarious giggle of one of our Compatriots in Adventure, she who had braved the River of Despair (the Mississippi), crossed vast plains (Illinois), and beaten back the hordes of everyday commuters in the City of Big Shoulders. "Hi Katie, how was the drive?" And so the Adventure began.....

The next couple hours are fairly dull, so I'll skip them for the sake of your attention.

In the midst of socializing and excessive drinking with our Compatriot in Adventure Katie, we received a cryptic text message over the high tech telephony device. It was from the Man Himself, He Who Must Be Acknowledged, The Sage of TP, Peter of Melbourne. "Hey, where are you guys, we don't know where our condo is, but I think we can find yours." The text was actually a blend of seemingly jibberish-like symbols and magical talismans, but Katie deftly translated for us, using her years of deft translation experience: "They'll be here in about ten minutes, they still don't know where their condo is".

Right then, time to prepare for His Arrival. We cleansed in the healing waters of Chicago and anointed ourselves with semi-precious liquids of Caribbean origin (rum). All was in preparation for "The Arrival". And so it was, upon the 20th Hour of the Sacred Day of TP Meet-up-dom, in the Year of our Savior Captain Morgan, that They made Their appearance. Their silver chariot was a newer model Toyota Camry. Rather noble of Him to select such a humble mode of transport, but the kids fit nicely in the back seat.

Hours of gesticulating, hugging, smiling, and consuming of adult beverages passed. All was well with Mother Earth; strife had ceased, wars were over, and the populace consumed more. Then came Gnorman, and his rowdy band of Gnomads. 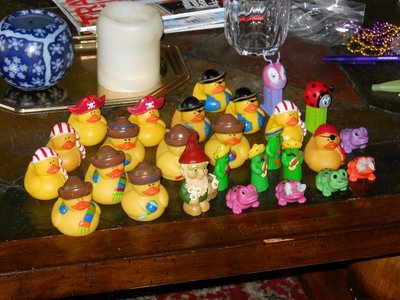 Fortunately, Gnorman was in a jovial mood. And there was feasting. Katie was busy translating ancient and highly provocative scrolls from her laptop computer device, and the children were well occupied in the transformation of Gnorman and his Gnomads into playthings. 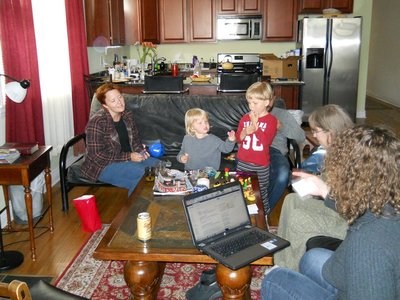 Months passed, crops flourished, and the children grew at a fine rate. And so it was time to sup. My Dearest had procured "reservations" at a well-known local food establishment known as The Greek Islands, located just off the coast of Corfu. We boarded a tramp steamer with nearly all in tow, and in a mere 30 minutes we were transported to Greece itself. Not a bad feat for a tramp steamer. "Sir, you must wait here until your whole party has arrived, then see me and I will make you wait another 20 minutes". Grand folks these Greeks. At long last, we were seated. Our waiter, Francisco, was well versed in the supplication of Adventurers. "Benevolent Sir, please to bring us drink, followed by food stuffs including, but not limited to, cooked meat products". And so it was done. The children lapped up course after course of moussaka, though in all honestly, my gyros were a bit on the dry side, and there wasn't enough tzadziki. And yet the world stopped turning for 90 minutes. Life was good, birds sang, and dogs lay down with cats. Time to head back to the condo.

At home in Shangri-La, time again passed slowly. There was more drink. And plans were hatched to visit memorable places of memory on the very next day. His Peterness transported His Family to their now address-not-so-mysterious location, and we three Adventurers settled in for the night. Though I do believe there was more drinking.

Enshrouding ourselves in our yurt-like bedroom place, we slept. Not well, as it seems the Fire of the Gods was upon us. Why would anyone set a thermostat to 73F? Sleep was restless at best. Tomorrow would be another day of Adventure, and we would be ready, albeit a tad blurry.

Stay tuned to the next riveting Adventure, wherein we voyage to the Hall of Ancient Creatures and discover not only dinosaur bones, but the heretofore unknown existence of Bread Seeds. Really, it's going to be fun......

Previous Next Table of contents

This blog requires you to be a logged in member of Travellerspoint to place comments.

If you aren't a member of Travellerspoint yet, you can join for free.