Breathe, Breathe in the Eire, Episode 4

My mind was again reeling. I felt suffocated, as if laying face down on an extraordinarily comfy pillow. The world had closed in around me, darkly stifling all sense and reason. Image after image of driving around Dublin (and I do mean "around" Dublin) in a fog crept into my subconscious. I was at the wheel of the trusty Hyundai, trying to get out of a car park at 2am. My Dearest was sitting in the passenger seat briskly chatting away with our cargo. There were 3 pieces of luggage in the back seat, oddly distorted into semi-human-like shapes. Giggling permeated the chat. Jason had a "Samsonite" plaque on his forehead. Phil had little wheels for legs and a handle sticking up out of the back of his collar. I couldn't help glancing into the rear-view mirror at length just to make sure no one would unpack themselves. This was made more difficult by the fact that I was driving at high speed through the most complex maze of car park I had ever seen. Which way is out, dammit? Oh look, there's a chicken holding a large neon "exit" sign in its beak. It must be that way. I veered to the right, through the pay barrier (throwing 300 euros into the basket) and made for the street. Wait, these are cobblestones. Am I on the sidewalk? No, I see headlights pointed at us, this must be the way. Screams of terror permeated the chat, with two pieces of luggage excitedly proclaiming that this was a one way street and I was going the wrong way. NO, BEAR LEFT. STOP!!!! TURN AROUND!!!!! Hey, I was only going one way, what's the problem? At that point, I had an epiphany. I opened my eyes, belched out something from TGIFridays that I had consumed earlier that night, and realized that, good God, they have the streets all backwards here. Why on Earth are all these cars coming right at us? I'm going the right way, what's wrong with these Dubliners???? Breaking through Jason's ever louder laughter, Nikki managed to get me to understand that I needed to turn around. Yes, all well and good, but where? The car park was a maze of one way streets, as was Dublin. I saw an opening, and my reflexes snapped into action. I slammed on the brakes, threw the shifter into reverse, backing over a smallish curb and an even smaller vehicle oddly parked, and veered back into traffic, this time going WITH everyone else. Sweet, now I'm in control. I glanced in the mirror again and noticed the ghostly white and terrified visage of Phil between Nikki and Jason and considered that perhaps I should back things down into third gear. OK, now we have to find Jason's hotel. Is it here in Dublin, or did you book in Galway? No, you git, it's just a few hundred kilometers to the left and by the river, said Jason. I can do that, so on I drove, keeping my one remaining open eye peeled for the river. One would think that a fairly sizable river would be easy to find. Not so, and in traditional Dublin style, it started to rain. Good Lord, now I can't see anything. The only thing I could do was speed up so we'd get there faster. The screams died down quickly, and chat resumed. Right, there it is, on the other side of the river, said Jason. This could be an issue, but I figured the Santa Fe was a rental and they wouldn't mind so much dredging it out of the river. I was game for giving it a shot, but the luggage in the back seat protested. Fine then, we'll find a bridge. For a city that has a river running right through the heart of it, Dublin had surprisingly few bridges to drive over, at least at the moment. I kept the images of doing an Evel Knievel in a rocket powered Hyundai over the River Liffey, but thought better of it. I'd probably have to pay a cleaning deposit anyway, and algae is difficult to clean out of the carburetor.

My eyes scanned the dashboard for a rocket thruster button. Shit, cheap rental, none to be had. We have these things in the States you know. For some reason, the giggling got louder. And ever so suddenly, a drivable bridge appeared. I slipped the transmission into 5th gear and floored it, launching us over the bridge and to eventual safety, or at least to the front door of Jason's hotel. Say, nice place you booked here. And it was only 300 euros a night, good deal there mate. Ryder Cup chap, I had no choice, Jason reasoned. Right then, here we are, and slamming on the brakes just shy of the reception desk, I let Jason out. Say Bud, while you're out having a fag, could you brush the broken shards of front door glass off the bonnet? Thanks ever so much. And we bid the wayward Kiwi farewell for the night. Backing out of the lobby, I laid down two perfect lines of black rubber and headed back into town. Phil had long since gone into cardiac arrest, but Nikki was there with the emergency oxygen bottle and was in the process of reviving him. Some days passed before I could find the bridge across the river again, and soon we dropped off Phil at his apartment. Nikki was next, so north I headed towards Swords. Warp 8....engage. I managed to get in a quick nap on the way, and awoke refreshed at Nikki's doorstep. Right then (giggle giggle), you remember how to get back to the hotel Beerman? Of course, my keen sense of time travel is alive. Goodnight then, see you tomorrow. 2007 had rolled around by the time we made it back to the Tulip Inn. We got lost only once, in a maze of shopping mall parking spots. Damn, when did they build this, I don't remember it being here this morning?

Episode 4 began with me finding a large wad of cotton well stuffed into my mouth. My Love was already awake and showering. I crawled into the bath and promptly dropped my head into the sink, flowing cooling water over my eyes. Say Love, did I hit anything with the chariot last night? No Dearest, you were mostly good, save for driving through the lobby of Jason's hotel, but they didn't seem to notice. Whew, good thing then. Yes Dearest, you were good at avoiding the local Constabulary. So then, what's on today's menu, after of course the traditional cooked meat products and many pots of hot coffee? Don't you remember Dear, we're to meet everyone at either Doyle's or Foley's and drink and watch the Ryder Cup. My God, tell me you're kidding. I thought I drank all of Ireland's beer last night. Hardly Poopsie, but you did put up a good effort.

The restaurant was a pleasant diversion from the pounding in my head. "Oh, yer Americans then. Can I get you some bacon and eggs and deep-fried blood products, exclaimed the waitress". Yes please, except substitute rashers for ham and skip the blood, thanks. And coffee. No wait, keep the blood, as I might be able to infuse some of it into my body and live again.

And we were off to pick up Nikki. The city was alive with Saturday shoppers driving along the sidewalks and through the stores. Sort of gave a new meaning to "drive-through". We parked just outside of Paris and began the long march to Foley's, or Doyle's. By the time we got there, my feet had been worn off to the ankles. That's ok, I didn't like those shoes anyway....

Today was the day. The final matches of the Ryder Cup were well underway and the American team had already packed up and gone home. It would be a tough go today, what with none of the American team actually playing golf. Jason was positively glowing, and in between pints and smokes, he kept rubbing in the fact that America would lose. Rich threw in his two cents, blabbering something in Welsh that roughly translated to "I'd urinate on Cleveland but I hate to fly". America was witnessing the depravity that Europeans are so well known for: rubbing in a victory. Bastards, didn't we save your butts in the big war? Where's the love now? It's not our fault Tiger Woods laid the entire Dublin School for Wayward Girls last night and he can't make a putt. Minutes turned to hours, and hours turned to months, or so it seemed. Finally, the Daily Mail made it official: America Loses: Ha Ha. My Love was ever so gracious in paying her lost wager to the Kiwi-who-can't-understand-real-football. And just to make it proper, we all signed the $5 bill before Jason could buy another pint with it. He probably still has it, sitting in a gold gilt frame adorning his living room wall. From this point on, everything became fuzzy again, save for an inflatable sheep that was to be Rich's new wife. I do recall autographing Rich's wife, as did the rest of the bar. Nikki kept giggling, Jason was floating on his ego, Phil was eagerly planning our route through the Emerald Isle, Greg was doing unspeakable things to the sheep, Rich was texting for a date that night, and my love was sodden with drink. I would have been sober as a church mouse save for the 489 empty pint glasses in front of me. The acrid bitterness of Sir Arthur's brew hung thickly in my mouth, sparing me the indignity of realizing that I couldn't lift my head off the table. We had adventure ahead of us, for tomorrow we would face the savage countryside. This was my only true memory of the evening, the joy of snuffing out the life of an overzealous Kiwi: 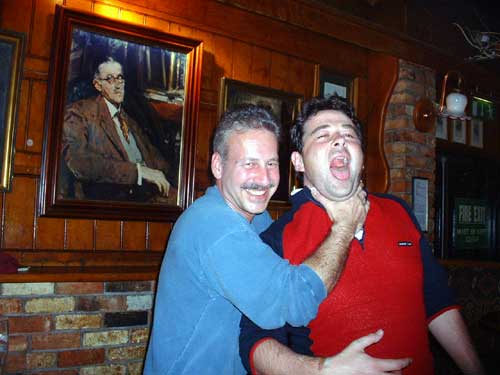 Sleep came swiftly that night as I drove back to the hotel. I managed to park on the fifth floor just outside our room, thank God there wouldn't be another hike to the bed. As my head hit the pillow, dreams of wild pygmies in pubs wound through my subconscious. Lead on MacDuff, and let he who not drinketh first be damned!!!!!

Stay tuned for Episode 5, wherein Phil leads us to ruins. And more ruins. And yet more ruins. Thank you for your attention, please queue up and leave the theater.

Posted by beerman 11:45 Archived in Ireland

Previous Next Table of contents

This blog requires you to be a logged in member of Travellerspoint to place comments.

If you aren't a member of Travellerspoint yet, you can join for free.